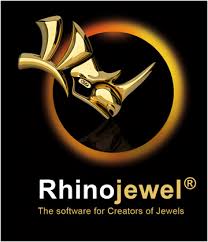 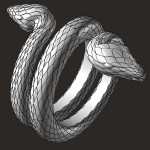 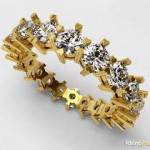 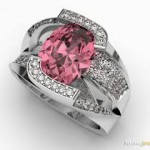 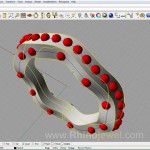 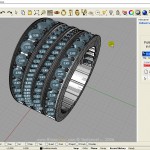 RhinoJewel is a professional jewelry design software which lets you create 3D models of jewelry and other luxury items easily, precisely and quickly.

It is suitable for both novice users as well as experienced CAD designers and features the most comprehensive range of jewelry-specific tools to help you through every stage of the design process.

Models created with RhinoJewel  can be used to generate outstanding photo-realistic renders and are characterized by absolute accuracy of dimensions, a feature which can be replicated in the real world by means of the best Rapid Prototyping solutions currently available.

RhinoJewel  adds to Rhino 3D an extensive collection of jewelry-specific tools divided into four main groups: Metal Tools, Gem Tools, Bonus Modeling Tools and tools related to SWAROVSKI GEMS. As always, you also have at your disposal the complete range of classic Rhino Tools, many of which are also found as a Rhinojewel-Enhanced version which boosts and optimizes their application in jewelry.

If you select the option to install RhinoJewel  with the Rhinojewel Interface (instead of as a Plugin) then you will find all tools re-arranged according to how often they are used in the jewelry creation process and with the option to access all subtoolbars much more comfortably, without the need for so many mouse clicks. This interface option is also suited to designers who are used to the classic Rhino interface, who will find it very familiar.

Rhinojewel Metal Tools
The RhinoJewel  Metal Tools focus on those aspects of the modeling and creation process related to making metal parts of jewelry.
Rhinojewel Gem Tools
The RhinoJewel  Gem Tools are mainly used when working with a variety of different gem cuts or during those stages of the modeling process when we are required to prepare an item of jewelry for the setting of gems.

The RhinoJewel  Gem Tools are mainly used when working with a variety of different gem cuts or during those stages of the modeling process when we are required to prepare an item of jewelry for the setting of gems. SWAROVSKI GEMS ToolsThis group contains tools relating to SWAROVSKI GEMS, the new product brand for Swarovski’s Genuine Gemstones and Created Stones. RhinoJewel  has been the first and is to date the only jewelry design software to incorporate this library of precision-cut gemstones.Rhinojewel Bonus Modeling ToolsThe Bonus Modeling Tools include a range of simple tools that are a modified version of some classic Rhino tools, enhanced to boost their performance and optimize their use for the creation of jewelry.